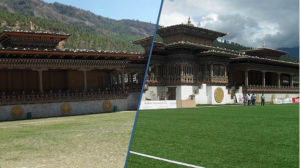 It is a very special project as it is the first FIFA project at such an altitude in the Himalaya mountains. The height of the project site is approx 2700 meters above sea level. We and our artificial grass partners were selected to execute the project, based on the confidence FIFA had in us.

Not many companies are equipped with people and machinery needed to complete projects with such huge logistics. Kolkata port in India is the nearest port for Bhutan to import the field to the project site in Thimpu. The distance is nearly 1200 kms to Thimpu from Kolkata port in India.

15 December 2012 was a rather special day for football in Bhutan, as HRH Prince Jigyel Ugyen opened the country’s first football turf pitches. The installation of a full-size pitch and two mini-pitches was made possible thanks to FIFA’s financial support and it represented a major step in the development of football in Bhutan, a country that is always in the lower reaches of the FIFA World Ranking.

The pitches are open five days a week from 06.00 until midnight, with people coming from all over Bhutan to use the facilities. In addition to league matches, the turf fields also play host to various other competitions primarily organised by the BFF, as well as national team training sessions.

The success of the pitches has been backed up by the growth of the league, which has been getting stronger and stronger in recent times. An increasing number of fans are flocking to matches as the league is now more competitive and attractive, and the players are also improving thanks to the better training facilities at their disposal.

It is not just the “big guns” who are allowed to use the pitches, however children up to the age of 12 are given two hours on the fields two days per week to play grassroots football. The programme has been an immediate success, as more and more parents are now bringing their children to the Chanjiji Football Ground.

To ensure the pitches will also meet the players’ requirements in the years to come, they are closed for two days a week to allow maintenance work to be carried out, which is vital as the pitches are in heavy demand.
The pitch maintenance costs are covered by the BFF’s decision to charge USD $50 per match, a fee that is also being used to create reserves to cover any future costs. These pitches truly have been an investment in the future and a positive development in Bhutan football.

“The future of football is in Asia where two-thirds of the world’s population lives. It’s not only an economic market but it can be a football market,” — Joseph S Blatter, Former FIFA President

“The pitches in Bhutan had to be adapted to meet local conditions,” — Prof. Dr. Eric Harrison